Work has been making me feel like this lately 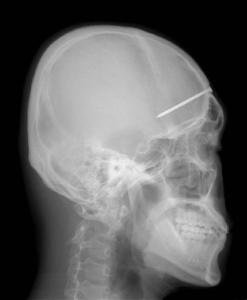 This X-ray picture shows a 5-centimeter nail stuck in an unidentified South Korean patient's skull Thursday, Dec. 2, 2004. According to a Seoul hospital, doctors found the nail after the man came to the hospital, complaining about a severe headache. They speculate that the nail stuck in the Xrays of a South Korean man's skull taken when he came to a Seoul hospital complaining of a severe headache. Doctors estimated the nail had been in his skull four years.
Posted by Travis (♀) at 12/09/2004