Continuing in the gustatory theme

I don't subscribe the The Atlantic, and I have precious little extra reading time these days--nonetheless, I plan to pick up the latest issue because any article titled "Horsemen of the Esophagus" (about "competitive eating") deserves to be read. (Thanks to B for the tip.)
Posted by Travis (♀) at 4/19/2006 No comments:

A funny thing happened on the way to the forum

The story isn't necessarily one I want to tell right here except to say we can draw two conclusions from the past few weeks: 1. it's worth spending lots of money on good motorcycle gear, and 2. there's not a lot you can do for yourself without thumbs. (Let me further explain, lest I give any of my friends the wrong impression, my part in the drama has been that of the sexy nurse, not the Russian "it's only a flesh wound" daredevil.)

This does also happen to be the busiest month of the two year cycle at my job on top of that, and next week is our biennial conference which basically means I'll be locked in a big room at the Marriott for eight days, after which time, regular blogging will recommence.

In the meantime, I was inspired to finally come back from the dead by the entry I just read over at Deep End Dining about the Weird Food Fest in Van Nuys. 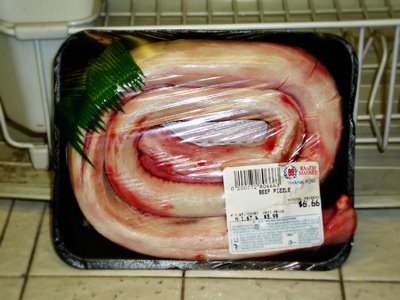 Beef pizzle--yes, it is what you think it is.

P.S. Said Russian observes, "It's better to have two half hands than one full hand," which I would say means basically a half hand in the hand is worth one in the bush. Oh no, scratch that. I think I'm off base there.
Posted by Travis (♀) at 4/18/2006 No comments: