What do tires and lungs have in common?

Both need to stay inflated to be effective, and when they do deflate suddenly, it's a very bad thing. Friday night, I blew a tire on the 405 and completely lost control of my car. I was going 75 or so and I remember thinking, "Okay you're going to crash your car now, so just relax. They say the worst injuries happen because people tense up before the impact." And sure enough, I plowed into the concrete retaining median wall, smooshing my car, my glasses, my phone, and my lung, though I didn't realize the latter for a night. In short, this past weekend things that are supposed to hold air, did not.

I was pretty banged up but nothing seemed broken except possibly a rib, and I know from my experience with my guy, aka "The Elbow," that they don't do anything for a broken rib. I was pretty clear-headed and the EMT guy said I seemed fine to him, but he could take me to a hospital if I wanted. What I now realize is that when you crash into a concrete retaining wall at full speed and pass out--even if it's only for a second--there shouldn't really be a decision-making process about this. You're going to the hospital. But sometimes I'm too stoic for my own good I guess. One of my father's favorite sayings was always, "I cried because I had no shoes, but then I met a man who had no feet," which always made me protest that meeting that man would only make me cry more. It's sad enough to have no shoes but clearly it is worse that there are people with no feet. But I digress. The point is that if you feel like someone threw you down stairs, you should go have medical professionals check you out because when you get thrown down stairs sometimes the insides of you don't fare so well.

So Saturday we went by K's folks. His dad's a doctor and took a look at me and speculated that I had a fractured rib perhaps. He said I should go in and have a chest x-ray taken at an urgent care place. We came home and napped, went out for some dinner and finally Saturday night went by a medical center to get a chest x-ray. They did a chest x-ray and a brain scan and took blood and then the doctor came in with something of a furrowed brow and said they wanted to do a CT scan of my chest because the x-ray was unclear. It could just the angle of the thing, she said, but she was concerned. Of course, it was Saturday night, so as the hours progressed, the ER was filling up with all of the other auto accidents taking place on LA's westside. Eventually they did another chest scan and--what do you know--turns out my left lung is in the process of collapsing. Go figure.

It's a pretty interesting thing really. I didn't know anything about collapsed lungs before this experience. I guess what happens is that your lung gets a little rip in it and when you breath some of the air that you exhale (carbon dioxide, I guess) escapes through that rip and collects in the chest cavity. But it has nowhere to go because the chest cavity is a closed container so it just accumulates there and the more it accumulates the more it displaces the lung itself--thus the collapsing aspect. The particularly pernicious thing about it all is that as the left lung collapses, the heart also starts a-roving, and begins to travel over to the right side of the chest. Hearts are really supposed to stay put. They are not nomadic organs, and when they ramble the aorta and stuff get all messed up (I'm sure there's a good Yiddish word I should use here).

So what they have to do is suck all the bad air out of your chest and reinflate your lung. After a while of being reinflated it reattaches itself to the chest cavity and, Bob's your uncle, you're ready to go.

The long and short of it is that before I knew it they were punching a little hole in my chest and attaching me to a "pleurovac" which sounds like an aquarium or a bong depending on who you ask. I spent a few days fearing the tube would somehow come out and I'd go flying around the room like an inflating balloon when you let go of its neck, but it went fine and I apparently heal more quickly than most people.

I am now at K's, which has become quite the clinic of late, being cared for quite well. (For those of you who are keeping track of such things--yes, this does make the second trauma unit and second totalled vehicle in four months) I have very little energy which is why it's taken me two days to write this and I'm not adding any more even though I have more to say. I'm tired and I need to go lay down for a while. I'm pretty much of a weakling right now.

But it's a good day. I'm wearing pants and I can go to the bathroom unassisted. Oh the simple pleasures.
Posted by Travis (♀) at 6/21/2006 No comments:

The sit-com possibilities are endless

Stephen Hawking appears to be the latest in the growing list of Al Gore-esque doomsayers who are looking to global warming as the sort of liberal rapture. He's arguing that we should be looking for homes in space somewhere because a disaster of some kind (global warming, nuclear war, genetically engineered virus...) may destroy earth:

"We won't find anywhere as nice as Earth unless we go to another star system," added Hawking, who came to Hong Kong to a rock star's welcome Monday. . . . Hawking said that if humans can avoid killing themselves in the next 100 years, they should have space settlements that can continue without support from Earth.

And we wonder why reality TV is so popular. 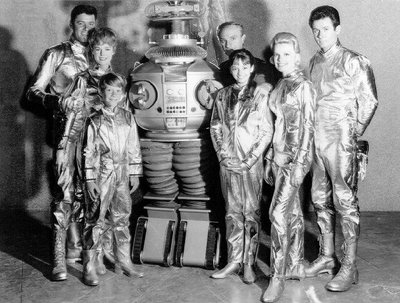 Things that should make you worry

Everyone needs a role model

And on the seventh day, god rested

Okay, I know the blognoscenti are all over this one, but I can't help but post it here as well. Apparently, this past Sunday, some overly zealous wanna-be Daniel figure, upon crawling into a lion's cage in Kiev and shouting "God will save me, if he exists," became lunchmeat. Reuters reports, "A lioness went straight for him, knocked him down and severed his carotid artery."

Um yeah. And if he doesn't, well...you're meat. So much for Pascal's wager, huh? 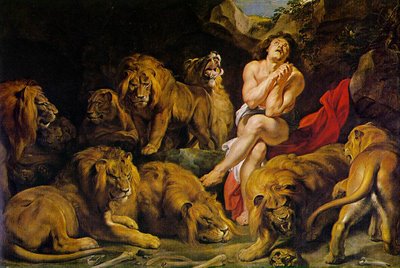 You know it's going to be one of those days...

...when you can't get out of your own parking lot because the batteries in your clicker have died overnight.

Leaving tonight for DC with my squeeze. He's never been there; I haven't been there in over a year. Yay for cheap airfares.
Posted by Travis (♀) at 6/02/2006 No comments:

A sign of how things are going at work. 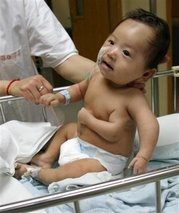 I'm not sure I'd have the surgery, honestly. Maybe after my big September deadline.
Posted by Travis (♀) at 6/01/2006 No comments:

But does she shave her legs?

That's what I want to know.

Making bold new political headway in the arena of male fantasy--DC comics has announced that the latest incarnation of Batwoman is a dyke. 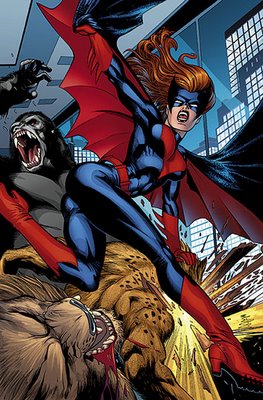 DC is describing her as a "lesbian socialite by night and a crime fighter by later in the night." Yeah.
Posted by Travis (♀) at 6/01/2006 No comments: