Facts about Budapest you may not know

1. Everything is so terribly overheated that it's impossible to sleep with the windows shut.
2. Construction people begin work at 6am.
3. Construction crews enjoy singing rousing Hungarian songs in time with the clanging and banging of their work.

It's my last day in Budapest and I feel a bit murderous. Clearly I'm going to need to learn the phrase "SHUT THE FUCK UP" in Magyar for my next visit.

Any day that includes exploring a castle, getting a 90-minute Thai massage, and going to the marzipan museum is, by definition, a great day.

The virtues of untidiness

All in all, we had a wonderful time in Denmark. Though the coffee--as the Swedes will tell you right off--is not the best in Europe, I defy anyone to find a decent cup at a meeting in the states, so that hardly seemed a point of argument. The workshop was a success. I think the Danes who attended learned a lot and feel more connected and while there were fewer than they had anticipated (around 50 at any given time), I think our being here will make some difference. I feel like I have made some friends and yesterday we got to have an unwind day that ended with a transcendent piece of strawberry tart.

Today we flew to Budapest. Here is a poster from the airport: 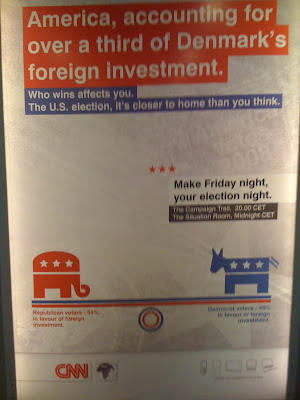 The small print you may not be able to read says 54% of Republicans favor foreign investment, while 45% of Democrats do. So I guess CNN at least is still arguing that the world is catching cold when we sneeze.

We have only been in Budapest a few hours, but I am already won over. Copenhagen was very nice and I expect the people are the sort that make me feel right at home right away. I think I must have been a northern European in my last life (are you reading this Trond?) because the manner and reserve most places in Northern Europe where I have been suits me so well. But for the city itself, beyond the people who made it, I am really loving Budapest already. It reminds me of New York in that you feel like you could discover something new and exciting or mysterious around the next corner. And there are trees. Even in their sad, leafless state I appreciate them. Copenhagen had precious little greenery in the city center.

We had goulash for lunch and it was delicious.

The word for the day is the small red hot pepper, which in Hungarian apparently translates quite ideosyncratically. This is from the magazine on the airline:

Should we prepare something even more Hungarian, we can improve the flavour with the addition of cherry paprika or the small pointed capsicum, which in our way of speaking was named after the most characteristic part of tomcats.

1. What the Danes call "a beautiful day" wouldn't make the cut in LA. "Beautiful day" in Danish translates to something like "not cold enough to freeze your tits off." Also it has been so dark and cloudy for so long that any day with the sun shining is by definition "beautiful." Who knows, if Kierkegaard had grown up in LA maybe he would have been a motivational speaker or something.

2. How can you go wrong visiting a place that has an entire category of tasty breakfast food named after it? There's a reason why they call them "danishes." What do we have in California? Rolls with fake crab in them and ginormous beds. Give me the tasty breakfast pasteries any day.

Greetings from the land of cheese, depressing philosophy, and fairy tales

I arrived last night in Copenhagen for a two-week, multi-workshop trip for work. I'll be here until Tuesday and then it's on to Budapest for two more workshops. I'm very excited to be overseas again. I haven't traveled internationally in a couple of years--not since Dublin. And I've never been to Denmark or Hungary so that's particularly exciting. Copenhagen seems a really interesting mix of old Europe and, well, Danish modern. In fact, much of the city looks like it could have come packed in flat cartons in the back of a hatchback. It is, apparently, the first sunny day in about six weeks, so we are looking forward to taking advantage of that in a little wander today. Our hotel is, I am told, around the corner from Copenhagen's red light district ("addict street" it was put to me), so that should provide for some interesting scenery. Perhaps I'll be able to post some pictures later in the week.

Other than the trip, much has happened in the past few months. I've been to Florida (December) and DC/Virginia (January) for family and work trips.

I was promoted at work. I am now "Director of Communications." I tried to convince my bosses that the position should be called "Communications Tsar," but they were unwilling to consider that, alas.

I joined a writing group, though you wouldn't know it from the amount I've been writing. I haven't even posted for blogging.la in forever.

Another friend of mine at work died at the beginning of January, and his memorial was two weeks ago. Last week, I went to a memorial for Bobby, a guy who is very central to my community and much loved and missed by many. It's been a real season of loss for us at the office (where we have had three coworkers die since September and another who is terminally ill) and in general in the larger community.