Droppin' of the Carp

One of my coworkers here also lived in Wisconsin for many years. She just visited there over the holidays and brought back this clipping from the Wisconsin State Journal:

Some state residents will be celebrating the New Year in a unique way -- by watching a 20-pound female carp lowered by a 110-foot crane. The annual Droppin' of the Carp was begun by Tom Nelson and his wife, Cathie, who got the idea from a New Year's celebration in Savannah, Ga., where they lowered a giant Styrofoam peach.
"We decided we could have some sort of New Year's celebration here in the Midwest," Nelson said. "Being on the river, it had to be a fish."

The couple organizes the event each year on St. Feriole Island. They expect to draw as many people as last year -- about 1,500.

The first year the Nelsons used a 3-foot carp and named it Lucky after they learned the Chinese believe eating carp on New Year's brings good luck. Each subsequent fish has had the same name. This year, Lucky is a nearly 20-pound female carp caught in the Mississippi River in late November by Mike Valley, who has the fish in a freezer at his store, Valley Fish and Cheese.

Valley plans to shellac Lucky and give her a few touchups, including a crown.
It takes about 2 1/2minutes to lower the carp, Nelson said. Those gathered will then sing "Auld Lang Syne," recite the Pledge of Allegiance and sing "God Bless America." Lucky will then return to the freezer until May, when she will be buried and a maple tree planted over her.

I can't think what to say that could improve upon the greatness of the story as it stands, so I'll just leave it at that. And once again I marvel at the fact that I lived in Wisconsin for 11 years.
Posted by Travis (♀) at 1/12/2007 No comments:

This is kind of interesting. Slate paired up with a market research group to graphically display the believability of Bush's Wednesday night "damn the torpedos" speech. Vidlit produced a video of clips from the speech and a focus group, broken down by political affiliation (Dem, Rep, and Ind) was asked to rate the video as it was ongoing using a mouse and a sliding scale. I mean, personally I don't really care about market research personal opinion stuff since 1.I think most people kind of stupid, and 2.I think most market research is poorly designed, but it's sort of interesting in a meaningless way.
Posted by Travis (♀) at 1/12/2007 No comments:

A big congratulations to my friends Marc and Christy who just had a baby yesterday. Ollie is already blogging, precotious cuss.
Posted by Travis (♀) at 1/11/2007 No comments:

Today marks the 230th anniversary of the publication of Thomas Paine's Common Sense, Wonkette reminds us. Of course, we love Tom Paine. And while we favor The Crisis, Common Sense does have its particularly salient passages:

Men of passive tempers look somewhat lightly over the offences of Britain, and, still hoping for the best, are apt to call out, "Come, come, we shall be friends again, for all this." But examine the passions and feelings of mankind, Bring the doctrine of reconciliation to the touchstone of nature, and then tell me, whether you can hereafter love, honour, and faithfully serve the power that hath carried fire and sword into your land? If you cannot do all these, then are you only deceiving yourselves, and by your delay bringing ruin upon posterity. Your future connection with Britain, whom you can neither love nor honour, will be forced and unnatural, and being formed only on the plan of present convenience, will in a little time fall into a relapse more wretched than the first. But if you say, you can still pass the violations over, then I ask, Hath your house been burnt? Hath your property been destroyed before your face? Are your wife and children destitute of a bed to lie on, or bread to live on? Have you lost a parent or a child by their hands, and yourself the ruined and wretched survivor? If you have not, then are you not a judge of those who have. But if you have, and still can shake hands with the murderers, then you are unworthy of the name of husband, father, friend, or lover, and whatever may be your rank or title in life, you have the heart of a coward, and the spirit of a sycophant.

In other news, Bush wants to add 21,500 more soldiers in Iraq. AP reports on the announcement which will be made later tonight: "In a now-familiar refrain, Bush was to portray the war in Iraq as "the decisive ideological struggle of our time."

Even my cat is cutting edge

Those who know me, know that my cat is a cat only a mother can love, really. He's obese, asthmatic, and suffers from clinical depression. When we moved to LA he responded to the stress of a nine day road trip and a radical relocation by determining that he was a cat who thinks outside the box, as it were. So he's been on meds for years now. Yes, I am clean and my cat is drugged. So today I see this article in the LA Times, complete with this photo of the day: 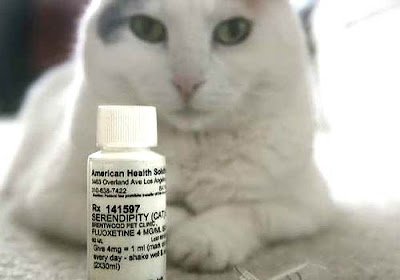 Today is my dad's yarzheit. He's been gone twenty years--rather incredible. I was missing him tonight. I lit my memorial candle and said Kaddish, and I thought maybe I would blog something of his to close out the night. So here are some long excerpts from an even longer letter he wrote my sister when she was in college. It's dated November 1967 and is responding in large part to her increasing political activism.

Some people feel one is not worth his salt unless he is a radical at 20 and a conservative at 40. This is a vile canard propagated by the pusillanimous. One need not become a fat cat at forty. See, e.g., Norman Thomas whose big many voice, turning again to childish treble, pipes and whistles in his sounds, to quote the Bard, but who preaches the same revolt against oppression that he sounded with stentorian speeches at the turn of the century. See also Bertrand Russell, William Douglas, and Jake Podofsky. (Jake runs the delicatessen at 14th and Irving Sts.)

I do not hold with those who attack all our institutions. I am not blind to the virtues of other ways of life but I personally feel that what we have in this country is the best way of life thus far evolved by man as a functioning society. I am 100% American. But I am not like those Southerners who loved the Confederacy so much they would not even wear a Union suit. I want my country to present a favorable image, to maintain a posture that I find admirable, and will not yield my right to criticize it when I think it is wrong. I want America always to be the land of the three "P's" -- Peace, Prosperity, and Pfreedom, for myself and my pfosterity. I want America to stay healthy because I know that when the United States sneezes much of the rest of the world catches pneumonia.

Finally, let me only remind you that you ought not get yourself so involved that you jeopardize yourself in your studies. It is essential that you get decent grades, continue your education, and work assiduously toward your career. Sorenson in the Saturday Review last week did not say anything much different from what many other pacifists have said in the past few weeks bu this article was read by millions because he achieved such eminence in his field that his voice was effective. At the big peace march we listened intently to what Dr. Spock said largely because more than half the people there had taken castor oil when Spock told their mothers to administer it. On the other hand, I'll bet you didn't hear one word Tillie Gockenheimer said, did you? And Tillie has been marching in protest demonstrations since Kemal Pasha besieged the poor Armenians in 1916 or whenever the hell it was. But that is because Tillie Gockenheimer dropped out of high school in Pottstown, Pa. when she was 16 and has been working in a brassiere factory in High Point, N. Car. ever since.

There's more, but those are the best parts. Except there is one place where there's a line something like this "7 883347xc (Travis' interjections)" because I must have been sitting in his lap while he was typing the letter. I was two at the time.

That my dad, who was blacklisted during the McCarthy era, could write such a letter, is real patriotism. I'm not much of a nationalist really, but I was, once upon a time a Constitutional scholar and I too love America from Ben Franklin to X. And at the same time, I'm proud as hell to have a dad who was a blacklisted labor lawyer.

It's all so complicated isn't it--our feelings for family and country.

Anyway, it's past my bedtime, maybe I will try to resurrect my blogging spirit for the new year. I can't promise anything though. I've made enough of those that didn't come to fruition in terms of my poor neglected blog.
Posted by Travis (♀) at 1/04/2007 No comments: