German engineering in the house

The limitations of the algorithym

Today I got this email from Amazon:
Dear Amazon.com Customer,

We've noticed that customers who have purchased The Phantom Tollbooth by Norton Juster also purchased books by Marian Macsai. For this reason, you might like to know that Marian Macsai's Ophthalmic Microsurgical Suturing Techniques will be released soon.

In the course of looking up something tonight, I came across this file not found page. It really did make me laugh out loud (not that I would be caught dead typing "lol").
Posted by Travis (♀) at 7/29/2006 No comments:

The word for the day is


That hour in the life of a man when first the help of humanity fails him, and he learns that in his obscurity and indigence humanity holds him a dog and no man: that hour is a hard one, but not the hardest. There is still another hour which follows, when he learns that in his infinite comparative minuteness and abjectness, the gods do likewise despise him, and own him not of their clan.
Herman Melville Pierre
Posted by Travis (♀) at 7/28/2006 No comments:

...what's really important is making sure that young women don't have control over their own reproductive choices. Which is to say the Senate continues to chip away at reproductive rights; this week they passed S 403, which makes it a crime to take a minor over state lines to get an abortion. The House and Senate still have to iron out the details of the bill, but the gist of the thing is as the bill sponsors describe it: the bill supports what a majority of the public believes: "that a parent's right to know takes precedence over a young woman's right to have an abortion." I can't even tell you how much this shit enrages me.

And what crazy logic governs this--if I'm understanding it properly, in Mississippi you can get married at 15 without parental consent, but you can't terminate a pregnancy without both parents' consent. What the fuck is that? So you can be married for years but have to get mom and dad's permission for family planning choices? That's totally insane folks. Completely loony.
Posted by Travis (♀) at 7/28/2006 No comments:

Headline of the day

What I love best about the story is this passage:

Most of the president's remarks were greeted with smatterings of applause, but many in the convention center stood up to clap when he urged the Senate to renew a landmark civil rights law passed in the 1960s to stop racist voting practices in the South.

"President Johnson called the right to vote the lifeblood of our democracy. That was true then and it remains true today," Bush said.

He goes on to elaborate:

So let me get this straight, Bush made this appearance because he was characterized as indifferent to Black suffering and racial injustice--particularly given the great job Brownie did dealing with Katrina. And so to raise his stock he comes out with a rousing speech on suffrage??? And for this he gets a standing ovation? For fuck's sake people, can we possibly set the bar any lower for President Monkey Boy? Sheesh.
Posted by Travis (♀) at 7/20/2006 No comments:

Well, it's been another one of those days where my head has felt like it's going to explode like scanners and I am yearning to bend the laws of time and space. But...I can still laugh. Yes I can.
Posted by Travis (♀) at 7/19/2006 No comments:

Phone photo from this morning 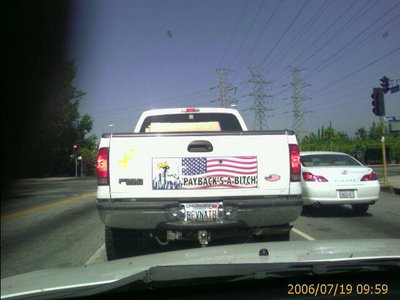 In answer to the questions:
Yes those are the twin towers in the left-hand corner.
No I did not rear end him.
Posted by Travis (♀) at 7/19/2006 No comments:

And just to prove my point

That I haven't lost my sense of humor, I want to share this with everyone because it's fucking hilarious.
Posted by Travis (♀) at 7/12/2006 No comments:

I'm in love with the real world

Okay, I've now had three different people ask me if I'm okay simply on the basis of my online invisibility. I've started to post here several times explaining what's going on with me, but then I sort of questioned my motivations in doing so and didn't finish. Nonetheless, the third time's the charm--so, in a nutshell....

You will recall that at the end of March I posted about my new boyfriend crashing his motorcycle and breaking nearly a dozen bones, having his elbow reconstructed, casts on both arms, yada yada... Then there was that week long work conference of mine and this project I am coordinating, which has a major league deadline looming. That started picking up steam. Then of course, the more recent accident of mine where things that were supposed to hold air (tires and lungs, in particular) did not. In the course of taking care of me, said boyfriend (aka The Elbow) broke a metal plate in his reconstructed elbow and had to go in for more surgery including a bone graft on the fourth. So we have the bone graft, off the charts intense work situation, accident recovery, insurance, need new car, blah blah blah my-head-is-exploding kind of stress. When I went for my follow-up doctor's appointment, the guy wouldn't see me because of my hmo coverage. Then I found out my primary doctor is gone--moved away. When I did get in to see someone new, she told me the medical center discovered a lesion on my thyroid and I need a follow-up scan (which happens Monday). And while I am certain it is nothing, the news had me weeping into my cell phone on the little grass strip in front of the medical offices. Me: "Sob...sob...I'm sure it's nothing...sob..." It's like that. To top it all off, the workgroup for my project is in town, and my body has determined to menstruate fiercely through every conference and workgroup meeting I attend. My kingdom for the red tent.

But, as I wrote to C earlier today, let me not give the wrong impression. Truly I am not feeling sorry for myself. I am seriously contemplating taking up a career change as a country western pop singer, but "collapsed lung" doesn't scan very well and, shucks, I was driving a Toyota.

Really I have lost neither my sense of humor nor my perspective. I'm so very aware that things could be so much worse. I could have easily not walked away from my accident--when you hit a concrete wall at 70 and don't break a bone, you're a lucky girl. I have great peeps in my life who have been helping me in so many ways. My job is amazingly great even if it feels so stressful sometimes it amazes me I don't just spontaneously combust. And then there's The Elbow. (Did I mention below he's calling us a "match made in hospital"? Anyway, any guy who calls you the day after his bone graft from the hospital bed because he's "worried about you" and your stress level pretty much rocks even if he does have bad politics.

All of that said, this has been one of the most stressful periods in a long time. I cannot remember being this stressed out since lo those many years ago when I was married to a complete nutter. At least these days I'm not getting ambulance bills that say "Reason for conveyance: Head in natural gas oven."