Why the British cannot be trusted with food

After shucking out $52,000 for a 850g white truffle, the London restaurant purchaser has let it rot to inedibility in a safe. The Italians are bereft. The truffle has been repatriated, and the Florentines, who do know how to respect food are planning a burial at tree. That is, after the reading of a requiem poem, the fungus will be laid to rest at a Medici castle under a tree planted by Amerigo Vespucci.

Readers are encouraged to submit requiem poem candidates. We're thinking something that begins "Four spore and seven years ago" or perhaps "Oh truffle, my truffle..." 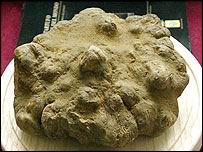 Soviet government officials have released a statement clarifying that any resemblance between Yurschenko and the truffle are purely coincidental.
Posted by Travis (♀) at 12/20/2004