The war tour of DC

Not really, but sort of.

I don't know why my recent trips to DC seem to be World War II focused, but they do. I finally saw the World War II memorial on the mall. I am here to tell you it is every bit as horrible as you may have heard. Not only is it monstrous in scale, but it looks more than a little like it was designed by Albert Speer. Truly you have to physically restrain the urge to goosestep when you get near the thing. I mean, didn't we win that war? Anyway, here are some photos, but they really don't do it justice. (As an aside, I didn't realize that one of the two companies contracted to build der monument is owned by a German company that used slave labor during the war.)

The view from the Washington Monument 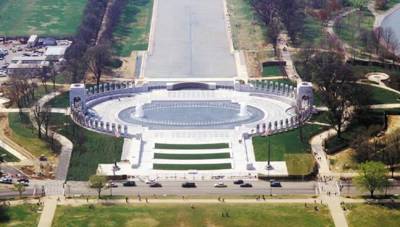 Some of the 56 pillars 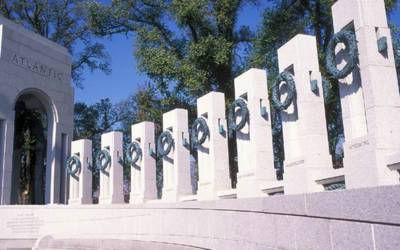 The pillars at night

Then on my last day in DC, we went to the new Air and Space Museum in Chantilly, Virginia. It's designed like a huge airplane hanger (I'm not sure if it was one at one time or whether it was just built to look like one.) Among the highlights is the quarantine station they used to put the astronauts after the first moon landing to get rid of the "moon germs." The station was made by airstream, which really cracked me up. They also had the requisite display of astronaut food (including tubes of borscht) and a shelf of "waste removal" methods. Myself, I have always wondered. I was happy to have my curiosity gratified. It seems there is the bag method and the "we don't call them depends" method. Good to know.

The Enola Gay is at the museum as well. I had seen the fuselage when it was on display downtown after the big interpretation controversy. The signage is now as matter of fact as it can be, the emphasis being on the plane rather than the bomb. 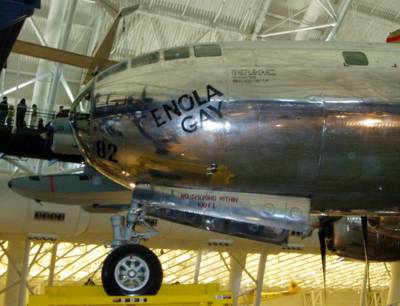 After wandering around the museum, we went to the IMAX to see Fighter Pilot: Operation Red Flag which is to the Air Force what The Italian Job was to the Mini Cooper. I'm admittedly a sucker for IMAX, but even so, I was ready to enlist after the movie. It was a full 500 person theater. With several shows a day, I figure all they need to do is move a recruitment table outside the door. Between that and the forthcoming Harrison Ford movie, we'll have plenty of new troops/cannon fodder.
Posted by Travis (♀) at 12/30/2004