Why I get my news online 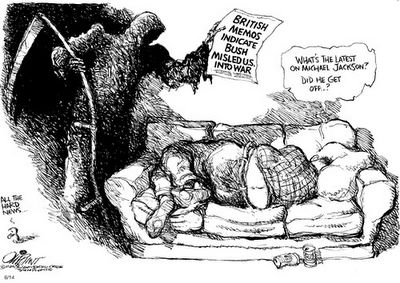 Oliphant chimes in on the DSM.

You know, when I was in DC, I watched a lot of cable news, which I don't usually do, and really, if you didn't know better, you would think the only two things happening in the world last week were a missing girl in Aruba and the Michael Jackson trial. Very sad.

I am back at work today, for the moment anyway. Still viral. Feeling, in fact, like the life force has been sucked from me by some sort of vampiric force.

And so, in the interest of energy saving economy, here are two things:

First, KCRW's alert about the evisceration of public broadcasting.

Second, as you all probably know by now, the House voted to restrict the Patriot Act. Not so much of a stand as some of us would hope, but I guess the longest journey begins with a single step.
Posted by Travis (♀) at 6/17/2005