Chutzpah of the satanic variety 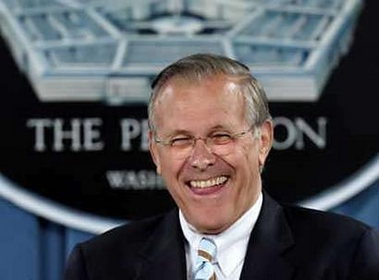 Rumsfeld on the Amnesty report:

No force in the world has done more to liberate people that they have never met than the men and women of the United States military. Indeed, that's why the recent allegation that the US military is running a gulag at Guantanamo Bay is so reprehensible.

Oh my goodness, there's so much transparency in Gitmo and so much oversight. There have been so many reforms instituted in the Department of Defense, and the oversight and the attention that's given to what's taking place at Gitmo is extensive. And the implication that it's a gulag is what's wrong -- not what's going on at Gitmo.