So tonight when I got home at the end of what has been a pretty marathon-ish week, I had two pieces of mail from my government. First, a letter saying the state of California's records show that I have unpaid tax from at least one year since 1999 and I can apply for tax amnesty. The thing is: I don't have unpaid tax from any year since I've been here, so I can't wait to fight that battle.

The second piece of mail is from the National Guard:

Dear Mr. ______,
Be one of America's most powerful weapons. Defend what you love most. You cherish your freedom, your country, your friends and family. Serve in the Army National Guard, and you'll defend America, its values and those you love most. You'll normally train part-time, but you'll be ready to serve whenever or wherever you are needed. So you can go to college or work full-time. . .

"I am an American soldier. I am a Warrior and a member of a team. I serve the people of the United States and live the Army values. . . " The Soldier's Creed 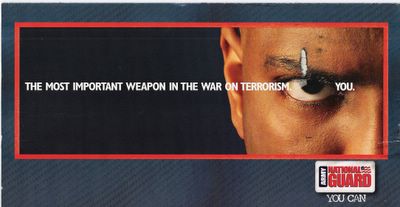 Dear National Guard, I don't need money for college or the job skills you are offering. I don't even want your tee-shirt offer or the American Soldier DVD. I am not a Warrior, and I don't believe that part-time shit for a minute. In fact, I think your plan is to have me drive around a war zone in an unarmored vehicle until someone blows my legs off, and that just doesn't sound the least bit appealing. The fact is, I'm a chicken-shit, bleeding heart liberal, smoker who values the things about this country y'all have forgotten about a long time ago. And I'm a girl. Piss off.
Posted by Travis (♀) at 1/28/2005