The difference between Germans and Italians

Rudolph Moshammer, German fashion designer, was found murdered today. Though I'd not heard of him before, I guess he was quite the phenomenon. Among his clients were the dynamic duo, Siegfried and Roy, as well as California's own Herr Governor. It seems he favored flamboyant, German-speaking extremists. So far the police haven't dug up a motive...there were no signs of a fight or burglary.

I know the comparison is tempting, but... 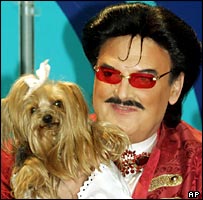